Fourth Sunday After the Epiphany

Collect for the Day
Almighty and everlasting God, you govern all things both in heaven and on earth: Mercifully hear the supplications of your people, and in our time grant us peace; through Jesus Christ our Lord, who lives and reigns with and the Holy Spirit, one God, for ever and ever. Amen.

Sermon: “Companioning with God” by Rev. Nick Jordan
Nick Jordan invites us to understand how Micah 6:1-8 teaches us to love God and our neighbor through engagement in our world.

Tagged as companioning with god, do justice love kindness and walk humbly with our god, fourth sunday after the epiphany

"Faith is a foretaste of the knowledge will make us blessed in the life to come." (Thomas Aquinas, as quoted in the Catechism of the Catholic Church)

Almighty God, you have enriched your Church with the singular learning and holiness of your servant Thomas Aquinas: Enlighten us more and more, we pray, by the disciplined thinking and teaching of Christian scholars, and deepen our devotion by the example of saintly lives; through Jesus Christ our Lord, who lives and reigns with you and the Holy Spirit, one God, for ever and ever. Amen.

(More information on Thomas Aquinas, “The Angelic Doctor,” is available from For All the Saints.) 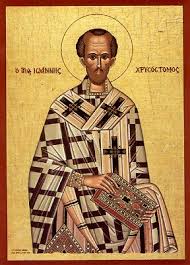 Just a taste of the information on Chrysostom over at For All the Saints:

John, whose epithet “Chrysostom” means “golden-mouthed”, was one of the greatest preachers in the history of the Church. People flocked to hear him, and they often dismayed him by applauding his sermons. His eloquence was accompanied by an acute sensitivity to the needs of his people. He saw preaching as an integral part of pastoral care, and as a medium of teaching.

The Collect
O God, you gave your servant John Chrysostom grace eloquently to proclaim your righteousness in the great congregation, and fearlessly to bear reproach for the honor of your Name: Mercifully grant to all bishops and pastors such excellence in preaching, and faithfulness in ministering your Word, that your people may be partakers with them of the glory that shall be revealed; through Jesus Christ our Lord, who lives and reigns with you and the Holy Spirit, one God, for ever and ever. Amen.

A Sample Favorite (by Ben Bowman)

As a musician and a Worship Minister, one of the most common questions I get asked is “What’s your favorite kind of music/song?” For me, answering this question is always both complicated and very enjoyable.  I’ve been blessed to grow up being influenced by a very wide range of rich musical genres. From classical music, both sacred and secular, to jazz and most of its sub-genres, to blues and old school R&B, to classic rock and most of the “pop” variations thereof over the last 40 years, and of course parallel to secular music I’ve always had an even stronger dosage of classical hymnody and CCM (Christian Contemporary Music).  If you were to take a look at my music collection you’d literally find a fairly balanced collection of all of those genres, probably with a little heavier amount of classical sacred music than anything else.

I’m not just a person who enjoys listening to music. I’m a student of music – I always have been, which adds complexity to picking favorites. That doesn’t mean I can’t relax and just enjoy music that doesn’t qualify as a favorite for me. On the contrary, that’s one of my favorite things to do. It just means that I have relatively high musical standards and often my reasons for a certain piece of music to be a favorite are probably different than just a simple “I like it”.

In addition, as a Worship Minister, my Christian theology and spirituality is usually playing a role in my decision-making process about what music I choose as a favorite.

So, here’s my THREE PART answer to the question, “What is your favorite kind of music/song?”:

1) If you posed the question like this: “If you were stuck on an island with a sound system and you could only have one genre of music to listen to, which would you pick?”, and then you tied me down and forced me to answer the question by any means necessary – in that case I would probably say that I would pick my English Reformation Choral Music.

2) Having said that, my official position is that it is unfair to make my pick.

3) For those of you who read this and think, “Dude, relax – it’s just music…” What can I say… I’m a hopeless music nerd. It’s one of my life’s great passions.

I leave you with an example of one of my favorite pieces of music. This is an unforgettable, haunting setting of “Let all mortal flesh keep silence” that moves my soul every time I listen to it. It was written by Sir Edward Bairstow (1874-1946). Two of the many reasons I love this setting:

1) The text is different than the traditional hymn we sing on Sundays. Specifically, note that there is no equivocation about Jesus himself being the very food for the faithful. It is not just a nice idea, or a nice metaphor. It is the truth without which we are lost.

2) There is a reverent gravitas to this music with this particular text that whenever I listen to it, consistently reorders my understanding of God’s judgment and mercy. I feel the angels’ “Alleluia” at the end not only as a powerful praise, but as a word of warning to all who would hear that “this is God Almighty, Creator of the universe, and he’s not kidding around”. In short, it accomplishes the very purpose for which it was written: it causes me to be silent and stand in fear and trembling. And rightly so.

Here it is. May it bless you! (You may need to turn your speakers up quite a bit to hear the softest parts. Either that or wear your headphones):

Timothy and Titus, Companions of Saint Paul the Apostle

The Collect
Almighty God, you called Timothy and Titus to be evangelists and teachers, and made them strong to endure hardship: Strengthen us to stand fast in adversity, and to live godly and righteous lives in this present time, that with sure confidence we may look for our blessed hope, the glorious appearing of our great God and Savior Jesus Christ; who lives and reigns with you and the Holy Spirit, one God, now and for ever. Amen.

"They only were hearing it said, 'He who used to persecute us is now persecuting the faith he once tried to destroy.' And they glorified God because of me." (Gal. 1:23-24)

A couple beautiful things worth noting:

Collect for the Day
O God, by the preaching of your apostle Paul you have caused the light of the Gospel to shine throughout the world: Grant, we pray, that we, having his wonderful conversion in remembrance, may show ourselves thankful to you by following his holy teaching; through Jesus Christ our Lord, who lives and reigns with you, in the unity of the Holy Spirit, one God, now and for ever. Amen.

This post was originally written for The Taser’s Edge.
Look for more info on the Conversion of Saint Paul at For All the Saints.

Tagged as blinding epiphany, conversion of saint paul, light of christ, saul saul why do you persecute me?

Third Sunday After the Epiphany

Collect for the Day
Give us grace, O Lord, to answer readily the call of our Savior Jesus Christ and proclaim to all people the Good News of his salvation, that we and the whole world may perceive the glory of his marvelous works; who lives and reigns with you and the Holy Spirit, one God, for ever and ever. Amen.

Sermon: “Shamed for Good” by Rev. Steve Breedlove
With the help of our team which went to Rwanda in Summer 2010, Steve unpacks what it truly means to live into the kinds of foolishness, weakness, and shame with which we are marked in Christ.

(Check back later for sermon audio.)

Tagged as january 23 2011, shamed for good, third sunday after the epiphany

The Confession of St. Peter

Almighty Father, who inspired Simon Peter, first among the apostles, to confess Jesus as Messiah and Son of the living God: Keep your Church steadfast upon the rock of this faith, so that in unity and peace we may proclaim the one truth and follow the one Lord, our Savior Jesus Christ; who lives and reigns with you and the Holy Spirit, one God, now and for ever. Amen.

(For more on the Confession of St. Peter, check out For All the Saints)

Tagged as confession of saint peter, thou art the christ the son of the living god

Antony is a saint which I wish I had known more about sooner.  He is functionally the Desert Father, an early example of that group of folks who, as Christianity became more the cultural norm and in certain ways more culturally accommodating, retreated further and further into the desert to live lives of study, unceasing prayer, and yes, as the need arose, battling demons.

Antony set one of the early Christian norms for what it meant to be a Christian.  Before Antony, there was the model of Biblical martyrs like St. Stephen, whose last words as he was stoned echoed Christ’s, even as Stephen saw Christ standing at the right hand of the Father in heaven.  In the early church, many Christians believed that literally dying for their faith was the truest way of living into the fullness of Christ.

Then Antony entered the picture; another saint, Athanasius, wrote about him; and there was now a new model for true holiness, which came to be called ‘bloodless martyrdom.’  The ‘way of the cross’ to which Jesus calls everyone who wants to follow him was shown to be a way that certainly costs everything (Antony himself was a rich heir who sold all he had and gave it to the poor), but which also did not necessarily involve the violent spilling of one’s blood.

Read Athanasius’ Life of Antony (really, read it, as it’s worth your time and honestly fairly accessible if you’ll give it a chance) and you find Antony more and more entering into the form of Jesus’ life.  While the author was certainly writing as someone in awe of the desert saint and the story is not historical by today’s understanding of history, the basic message is still clear: the life of Antony (and the life of every saint) looks like the life of Jesus.

The Collect
O God, by your Holy Spirit you enabled your servant Antony to withstand the temptations of the world, the flesh, and the devil: Give us grace, with pure hearts and minds, to follow you, the only God; through Jesus Christ our Lord, who lives and reigns with you and the Holy Spirit, one God, for ever and ever. Amen.

Tagged as desert fathers, saint antony, the life of antony

Second Sunday After the Epiphany

Collect for the Day
Almighty God, whose Son our Savior Jesus Christ is the light of the world: Grant that your people, illumined by your Word and Sacraments, may shine with the radiance of Christ’s glory, that he may be known, worshiped, and obeyed to the ends of the earth; through Jesus Christ our Lord, who with you and the Holy Spirit lives and reigns, one God, now and for ever. Amen.

Sermon: “Sermon for the Second Sunday after Epiphany” by Rev. David Hyman
Yes, that is indeed the title, as David explains in the sermon.

Tagged as second sunday after epiphany